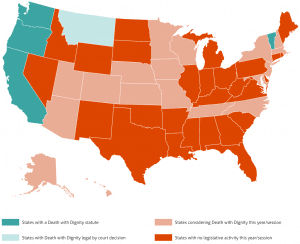 America is such a large country; it makes sense to me that the individual states differ.

We even have a name for when state and federal laws disagree called the supremacy clause, which is part of article VI of the Constitution.

When we think of state laws and the differences between the states, we usually consider taxes, abortion and gun laws. We now have new differentiators in the way of marijuana and death with dignity. We’re all aware of how the marijuana laws are changing across the nation, but most people are unaware of the assisted suicide trend. And things are a-changin’.

Terminally ill adults in New Jersey will now be able to ask for medical help to end their lives.  Governor Phil Murphy signed the Medical Aid in Dying for the Terminally Ill Act and the law went into effect August 1, 2019.

The NJ law allows adults with a prognosis of six months or less to live to get a prescription for life-ending medication. This make New Jersey the 9th state/jurisdiction to allow physician-assisted suicide (the others are California, Colorado, Oregon, Vermont, Washington, Hawaii, Montana and the District of Columbia). If you notice, Florida is not on that list.

The law requires a psychiatrist or psychologist to determine that the patient has the mental capacity to make the decision.  The prescription is a series of self-administered pills that can be taken at home.

“Allowing residents with terminal illnesses to make end-of-life choices for themselves is the right thing to do,” said Governor Murphy in a statement. “By signing this bill today, we are providing terminally ill patients and their families with the humanity, dignity, and respect that they so richly deserve at the most difficult times any of us will face.”

The bill narrowly passed in the Senate, and some who voted against it are apprehensive about its effects.  “The bill has lasting ramifications and lots of loopholes,” said Republican Sen. Robert Singer. “We are so concerned about opioids, and not trusting doctors with opioids.  But now we are willing to trust them with this.”

NJ has tried passing versions of this bill since 2014, but this was the first time the bill went to a vote in the senate.  Nineteen other states are considering physician-assisted suicide bills. Florida is not on that list yet…