A Text Message is No Substitute for a Will

It appears that a gentleman in Queensland, Australia, wrote out a text distributing his property to this brother and nephew and disinheriting his wife and son.  He ended the text with the words “my will” but never sent it.  A few hours after preparing the 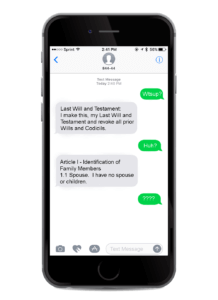 text, he tragically took his own life.  The text was later discovered in the draft file on his phone and, as expected, resulted in probate litigation.

The Court decided that the text was similar to a holographic Will and that it included all the magical words that make Wills valid (in Australia): testamentary intent, acknowledgment of family and the use of the word “Will”.

A holographic will, handwritten and signed by the creator-usually without witnesses, is not typically valid in Florida or New York. Similarly, a nuncupative will, an oral Will given immediately before one’s death and in front of witnesses, is not valid in Florida or New York.  However, as the law plays catch-up to technology, probate lawyers are faced with these issues.

As far as I see it, a few issues arise with this ruling.  It would seem to me that accepting a text message as a valid will could easily result in fraud.  How do we know who typed the text?  Who knows if the person was of sound mind?  The Australian Court did not address these looming issues in their ruling.

Despite what this case may suggest, it’s important to draft your will properly and execute it correctly with witnesses and all of the formalities.  It’s not a good idea to rely on the law adapting to technology. It may get there, but not today.