What Can We Learn From Lionel Messi’s Contract Dispute? 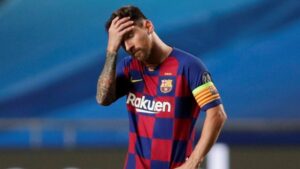 If you haven’t heard what’s going on in the world of Soccer, let me tell you, it’s more riveting than reality TV these days. Lionel Messi, one of the greatest soccer players E.V.E.R., is (maybe) leaving Barcelona, one of the biggest clubs in the world. I’m tellin’ ya!

Messi’s departure is a big deal as 2019-2020 is the first season without a title for Barcelona since 2007-2008, leading to a change in managers. According to Messi’s contract with Barcelona, he had a right to obtain a release from his deal WITHOUT A BUYOUT FEE, as long as he gave notice to Barcelona before June 10, 2020. When did he give them notice? August 25.

Since he missed the deadline, the buyout clause is Messi’s contract with Barcelona allows the club to demand a buyout of around $800M for his release.

Messi’s lawyer is arguing that the notice timeline should have been extended due to, non-other then….. COVID-19. The Spanish football season was expected to finish on May 20 but was extended as a result of Spain’s lockdowns during the early stages of the COVID-19 pandemic. Messi’s attorneys claim that the intention of the parties at the time Messi’s contract was signed was for Messi to have a few weeks after the end of the season to contemplate giving notice of departure. Messi’s argument is that since the season was extended, the deadline was extended with it.

Barcelona is arguing that the June 10 deadline is firm and not intended to be extended.

Could this dispute have been avoided? I argue that Messi could have requested Barcelona to provide him with an explanation or amendment to his contract based on the impacts of COVID-19 when the pandemic started. While Barcelona would have likely been alarmed or not agreed to an amendment, Messi would have known their position early and could have served timely notice.

Now would also be a good time to discuss the force majeure clause in a contract. This is a common clause in contracts that releases both parties from liability or obligation during an extraordinary event or circumstance beyond the control of the parties (such as a war, strike, riot, crime, epidemic or an “act of God”). The event must frustrate the intended purpose of the agreement, preventing one or both parties from fulfilling their obligations under the contract. The analysis for a force majeure argument depends on the language in the agreement as well as the facts of the intended purpose of the agreement and the extraordinary event. Either way, I argue that once in Court to determine the meaning of a clause, both sides have effectively lost.

Curious how Messi will fair in his pursuit of freedom.